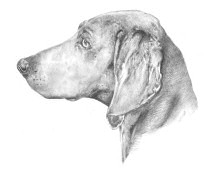 It was a great day at the Weimaraner Klub Shooting Ratings. Jacob passed his NSD test and Cassie passed her NSD and NRD tests. Also from the same litter as Cassie, Quintin Bubb’s Ronin (Gundalf Catch Fire) passed his NSD and NRD.

Other dogs that did well were Denim (Sabaka Mist WarriorAce ) who got the the Best Performance in the Field award and also passed his NSD. Denim is a son of Leo.